Philosophy of the Bronowski Institute

A depiction of Einstein, The Curies, and Galileo in the humble setting of a dilapidated shed. While Albert Einstein first worked as a clerk in the Swiss Patent Office in Bern, Marie and Pierre Curie isolated radium while working for four years in an abandoned morgue at La Sorbonne, where snow blew in through the cracks during the winter. Similarly, Galileo Gallilei was confined under house arrest in Florence for publishing his controversial work, Dialogue Concerning the Two Chief World Systems, where his inspiration continued for the remaining nine years of his life. The lives of these great scientists demonstrate how their creativity and sense of urgency demotes the objections of cynics around them and transcends the most modest amenities. 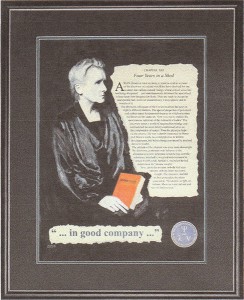 A depiction of Marie Curie patiently caressing her daughter’s legendary account of the underlying events behind the discovery of radium. The most moving of these events included subsidising the transportation of pitchblende from Vienna to Paris and the restoration of conducting their research in an abandoned shed on Rue Lhomond at La Sorbonne in Paris. After being discarded by her contemporaries and four years of dedication in less than ideal settings, she was awarded the 1903 Nobel Prize in Physics. Such historical events remind us of the extent to which a scientist is prepared to go to satisfy their creative drive and demonstrates what they are prepared to endure to discover the hidden truth in nature.

The plight of renowned scientists like Einstein, the Curies and Galileo are classic examples of how many have suffered at the hand of public and professional ridicule, exploitation and intellectual suppression, and yet these great people never gave up. While most of us will endeavour for a lifetime to achieve only a fraction of what these great men and woman of science have achieved, we may still do ourselves the greatest service by modelling ourselves after them.

This is the reason why the Bronowski Institute has come to be.
The Bronowski Institute of Behavioural Neuroscience was established on the premise that the scientist is morally obligated to pursue his work to the ultimate end of providing benefit to mankind. His curiosity to discover the hidden truth in nature fuels his desire to spend hours in the laboratory observing, recording, calculating and hypothesising if only to unravel the smallest component of nature’s matrix.

As he observes what all others have seen for eons before him, somehow, he sees something that no one else has ever seen. And nothing will keep him from this.

No matter what institution is at the focus of social control: the Institution, the state or even the intellectual collective itself, no one can discourage him from doing what he has to do. And, if need be, he will do it in the most simplest of surroundings. Neither can he be discouraged from sharing his discovery with the rest of humanity. If there is only a glimmer of hope that his discovery will improve the human condition, that human ignorance and suffering will be lessened by his perseverance and devotion, then he is bound by his moral compunction to let it be known.

The Bronowski Institute of Behavioural Neuroscience is named in honour of the late Professor Jacob Bronowski, who is one of the founders of the Salk Institute in La Jolla, California. The founders of the Bronowski Institute endeavour to acknowledge Professor Bronowski’s dedication to his portrayal of science, in the context of serving mankind. This concept is best illustrated in his works including “The Ascent of Man” and “Science and Human Values”.

Most importantly, he emphasised the unparalleled importance of creativity, camaraderie, morality and freedom of thought in the process of scientific practice. The Bronowski Institute has been established with the specific intent of encouraging these attributes and letting scientists get on with doing what they do best: practicing science.